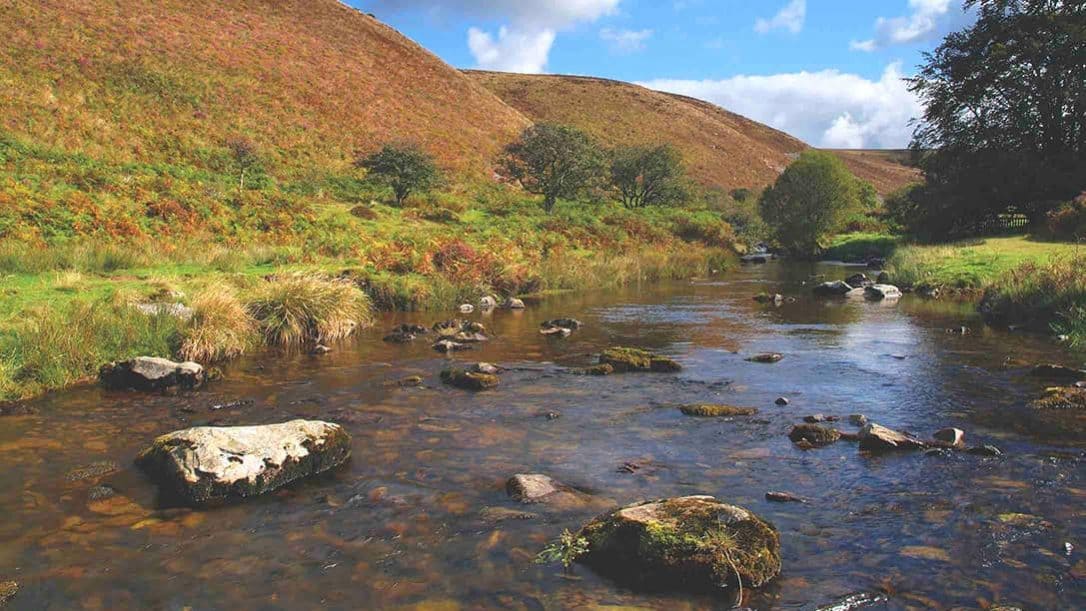 In Lorna Doone, R.D. Blackmore set his isolated and lonely Doone village in a hidden valley high on the moor. Here archaeology and romantic fiction meet face to face. Most of us claim to have read or to know the story and it has reached notoriety in English literature. On Exmoor, it divides opinion: fact or fiction? Legend or nonsense?

The origin of the Doone legend is obscure, but it existed by the early-nineteenth century. It focuses on a band of outlaws – the Doones – who were supposed to have been descended from a noble family of Scottish origin. The legend claims that they were busy on Exmoor in the 1600s, robbing and pillaging the locals. This is a great story, despite the lack of any contemporary corroboration! Yet somehow, it is a story that tantalises, mainly because Exmoor has been seen for a long time as beyond the law… for example, by the very early 1800s it had an established reputation for smuggling, with a group known as the ‘banditti’ terrorising Simonsbath.

Richard Blackmore, living at his father’s rectory at Oare, knew of the legend of the Doones, and it inspired his historical novel Lorna Doone which was first published first in 1869. It went on to become a national treasure, devoured by the nation’s readers on a huge scale.

The novel is drawn against the upheaval of the Monmouth Rebellion of 1685 (in which Exmoor became, albeit obliquely, involved). The hero is John Ridd of fictional Plover’s Barrows Farm near Oare. It is tempting today to stand on the ruins of Larkbarrow Farm on the high moor on a sunny day in early spring and listen to the skylarks hovering and singing overhead, and to come to the inevitable conclusion that Blackmore drew inspiration from this place and its exquisite name.

John Ridd’s father is murdered by the Doones and John returns from school to run the farm. By chance one day he wanders into the Doone valley and meets the beautiful Lorna. They are instantly drawn together and begin an illicit friendship which risks the wrath of the evil Carver Doone, who both murders John’s father and is also betrothed to Lorna. The novel charts John and Lorna’s relationship and eventual marriage, at which Carver shoots at Lorna through the church window. He flees, pursued by John Ridd, and is then engulfed in one of Exmoor’s bogs known as the Wizard’s Slough.

Blackmore’s romance makes full use of Exmoor’s evocative place names, such as Cloven Rocks and the Devil’s Cheesewring, but his descriptions of the landscape convey a scale which does not sit comfortably with Exmoor’s gentler, more sublime character. His Doone village in its fortress-like valley – Badgworthy Water – evokes Glencoe rather than ‘Glen Doone’. Scale apart, a walk into the ‘Doone Valley’ set in ‘Doone Country’, as the Ordnance Survey had it for many years, was a cultural pilgrimage for many during much of the twentieth century.

The well-known ‘Doone village’ itself can be found at the confluence of Badgworthy Water and a narrow neighbouring valley. It is a strangely beautiful place where the valley slopes are scattered with patches of scree (very Scottish) and natural hillocks occupy the valley floor, creating an enclosed, possibly fortress-like feel. If that was not enough, there are the traces of stone walls, forming little rectangular buildings. Set on the riverbank, they bring to mind Blackmore’s description of Lorna’s home:

For she stood at the head of a deep green valley, carved from out the mountains in a perfect oval, with a fence of sheer rock standing round it, eighty feet or a hundred high; from whose brink black wooded hills swept up to the skyline. By her side a little river glided out from underground with a soft dark babble... But further down on either bank were covered houses, built of stone, square and roughly cornered, set as if the brook were meant to be the street between them. Only one room high they were, and not placed opposite each other, but in and out as skittles are, only that the first of all, which proved to be the captain's, was a sort of double house, or rather two houses joined together by a plank bridge over the river.

This wonderfully evocative and detailed description can be traced on the ground as you pick your way amongst the stone heaps of little rooms and walls. It is hardly surprising to find that what is on the ground accords so well with Blackmore’s description, for it was precisely here that Blackmore himself wandered and found inspiration for his Doone village in the wildness, the streams and the ruins at Badgworthy.

In truth, what Blackmore had discovered for himself were the remains of a village; not a brigand’s hideout of the 1600s but a village of medieval houses belonging to a remote little farming community that lived on the edge of Exmoor in the 1300s. In 1170 this land was given to the Knights Hospitallers, under whom the village presumably came into existence, but was described as previously ‘the land of the hermits of Badgworthy’. Quite what this lonely monastery looked like we don’t know, as no trace of it survives, but what we do know is that by the 1200s there was a priest, named Elias, and a chapel within a secular village. However, by the early 1400s houses were empty and tenants could not be found to live there. The place became abandoned, probably because of a deteriorating climate, and perhaps because it was easier to live elsewhere where rents had become lower due to the Black Death. Whatever the reasons, the village died, although a single holding may have endured; in any event, one house was occupied at the very beginning of the 1800s.

Today, if you go there in May before the bracken sprouts up and hides the ruins, you can find the traces of 12, 13 or maybe 14 buildings. This is a big village and is scattered in the folds of the valley on either side of the stream which joins Badgworthy Water. Old fields run up the slopes whilst terraces run along the hillside and they are testimony to medieval farmers growing cereal crops here when summers were warmer. In fact this village – its houses, fields and terraces – is a complete, relict medieval landscape, the best on Exmoor and one of the best preserved of its type in the South West.

For me, a trip to Badgworthy is a walk back in time to a medieval community who lived and farmed in the harshest of environments and who eventually lost that battle and left their homes to slip away into the landscape that they had called home. It is also a trip to a different time: perhaps a spring afternoon in the 1860s where a disgruntled figure is hunched upon a rock, scrutinising his surroundings and occasionally scribbling into a battered notebook… an as-yet unwritten book that was to become a bestseller, propelling this writer to fame.

Badgworthy: Blackmore’s landscape, the landscape of the medieval farmers, the elusive sanctuary of the hermits of Badgworthy. Badgworthy is one of Exmoor’s essences, but, like a lined face or the patina on old furniture, is its beauty not in its layered meaning and resonance… whether fact or fiction?

This article appeared in Issue 86, Spring 2019, which is available here: https://www.exmoormagazine.co.uk/shop/editions/spring-2019/