You are here:
Things to do 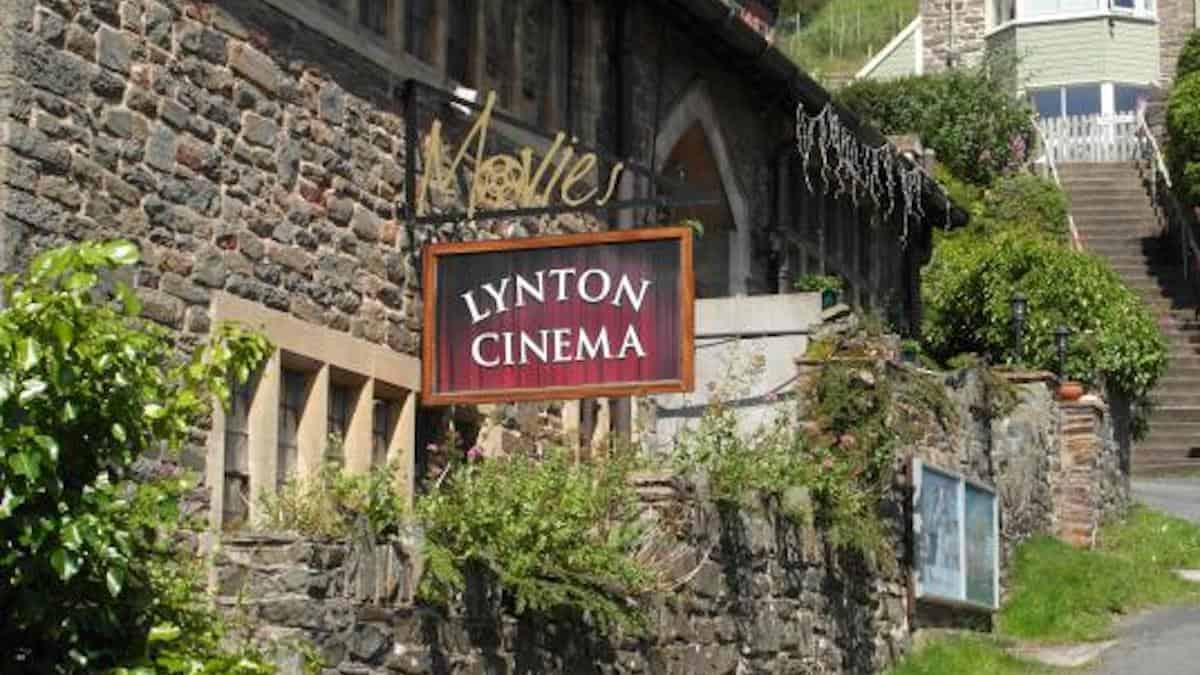 Lynton’s first cinema, the “Picturedrome“, opened in the Foresters’ Hall in 1916 and showed silent movies until 1930. With the advent of talking pictures, the location of the cinema moved to the former Congregational Church and became known as the “B.B. Cinema“.

When the owner Major Blackhurst died in 1961, the cinema closed and the property was sold off for £2950. Thereafter films were screened for many years on a part-time basis at Lynton Town Hall. This was far from ideal and it was felt that the only way forward, would be to have a seven-day a week operation showing up to date films in its own premises.

In 1999 the Methodist Chapel in Lee Road closed and was purchased by North Devon District Council. The Council offered a part of the Grade-II listed building as a venue for a new cinema. Money was raised through obtaining various grants and the sponsoring of seats and equipment. After months of hard work, by dedicated groups of people, the Lynton Cinema finally opened its doors on Friday, June 1st 2001 with the film Bridget Jones Diary.

“Lynton is the smallest town in the UK to have its own cinema.”

The cinema has a seating capacity of about 70, creating a unique intimate atmosphere. The auditorium is heated, air-conditioned and is one of very few in the West Country to have full digital surround sound. We screen the latest films approximately two weeks after their first release date.

“Wherever you come from, you can be sure of one thing – a very warm welcome.”

One feature of Lynton Cinema is the comfortable seating and the very generous amount of legroom. Lynton’s cinema is a huge achievement to all those involved and well worth a visit.

AN AUTOBIOGRAPHY ON BILL PRYOR AND HIS LIFE IN CINEMAS AND THEATRES.

In my early teens, I worked as a poster boy at the King’s Theatre, Ramsgate, where my mother was employed. Dad and I ran a mobile (16mm) Cinema around the villages in East Kent, plus the Sandria News and Cartoon Cinema in Ramsgate.

I had the privilege of working in three theatres; the Royal Victoria Pavilion and the West Cliff Theatre both in Ramsgate, backstage and on the limes; also, at the Theatre Royal Margate. I am proud to say that I helped save the Theatre Royal some twenty years later from becoming a night club.

First Cinema I was employed in was the Carlton Westgate-on-Sea, projection and front of house. We ran “Lawrence of Arabia” twice daily for three weeks to a packed house, amazing as we were going through a heat-wave. It was at the end of one of the matinees, I was on the door, when this gentleman came out, looked me straight in the face and said

I’ve sat there for three hours and thirty-nine minutes and all I’ve seen is sand”, with that he just walked away – what can you say to that?

I spent the next three years as the second operator at the Oxford in Whitstable. I hardly saw the chief, I spent my days running the box on my own with up to five films in a day, carbon arcs with change-overs every 22 minutes. We had many visits from the DJ’s from Radio City the pirate radio station. The station was located on the Shivering Sands Forts in the Thames Estuary, their offices were next to the Oxford. The other visitor was Peter Cushing, who lived nearby, he would look at the mercury rectifier bulbs for the arcs – he thought he could use then in one of his horror films.

Several intermediate jobs later I was offered the relief managers job for Cradem Cinemas, Rio Canvey Island. It was at Canvey Island one Sunday night, packed with lads, somebody opened both exit doors either side of the stage and ran a motorbike across the front of the stalls It was in that moment when decided to go back to projection. I took the chief’s job at the Plaza Oxted, where I spent ten very happy years before moving to the West Country.

I opened up a print shop in Lynton, did some relief projection at the Savoy, South Molton then took over running the Town Hall Cinema in Lynton. After a number of years, I passed this on to a friend of mine, Gordon Potter, who like myself had been in the cinema trade all his life.

Many years later when he retired, I said its time we put a full-time Cinema back into Lynton. The last one was the BB Cinema which closed in 1961. Opening a full-time hall was a big step, as Lynton is a town with a population of around 1,800. Gordon joined me and we ran it between us until he passed away in 2012.

Other interests: I set up the preservation for the Battle of Britain class locomotive “Manston” which is now based at Swanage. In Lynton, I set to re-open the Lynton and Barnstaple Railway which closed in 1935 (I live at Lynton Station), one mile operates and the intention is to put back the entire 19 miles, which is well underway.

I have visited Radio Caroline on three occasions. Plus, two visits to Radio North Sea, where I did a half an hour live broadcast, talking about our Cinema. I have driven around most of America, where we drop in to see many friends and people who operate Cinemas. I enjoy horse riding and I am learning Welsh. My son Will works for Merlin Cinemas at the Embassy Ilfracombe and my nephew Daniel is the projectionist at the Granville in Ramsgate.

THAT’S ALL FOR NOW FOLKS,

See you at the next screening and thank you for your continuing support,