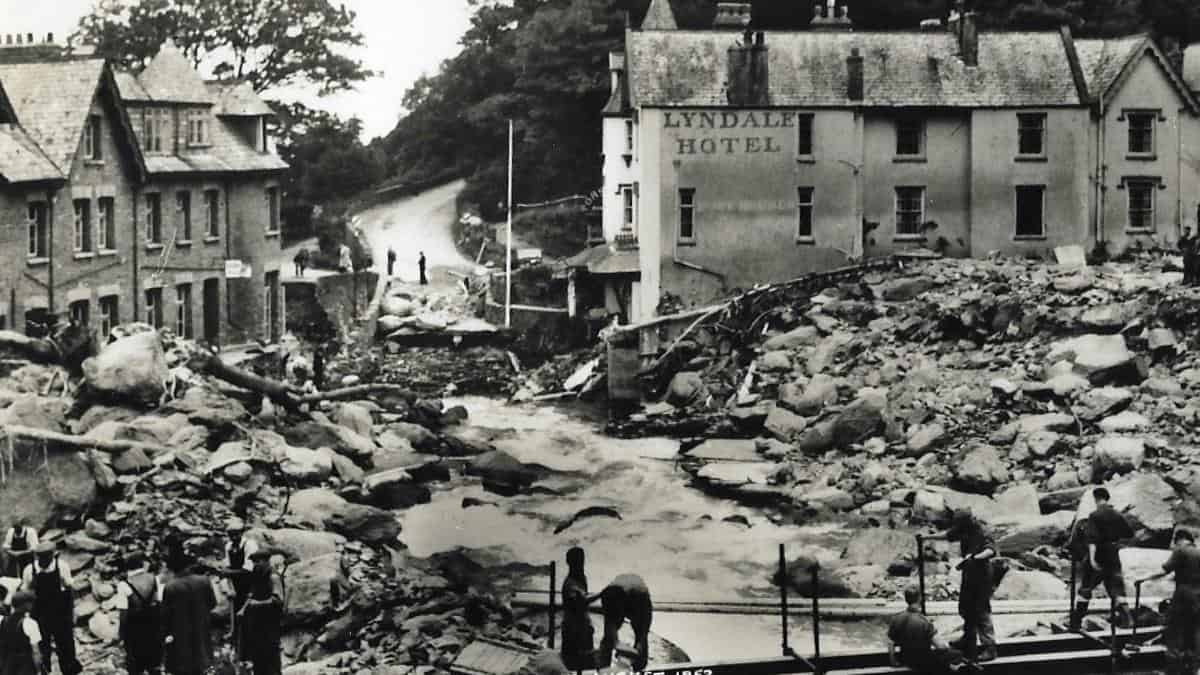 On Friday 15 August 1952, the tiny village of Lynmouth suffered what could be described as the worst river flood in English history.

On the day itself, just over 9 inches (230mm) of rain fell, 6 inches (150mm) of which fell in a few short hours in the afternoon/early evening. Add in the 6 inches (150mm) of rain that had already fallen in the first two weeks of August, then it is no surprise that the top of Exmoor was unable to absorb the rainfall and was totally overwhelmed.

A noted author, S H Burton, recorded that water stood 18 inches (450mm) deep in the area of the moor around the Chains – indeed, the road between Lynmouth and Simonsbath, ironically at a place called Dry Bridges, was reported to the Devon Constabulary in the early evening as being washed away and impassable. The road here is half a mile above Farley Water, the nearest river. It was estimated that 90 million tons of rain fell in North Devon and West Somerset on that day.

This rainfall flooded into the many tributaries of the East and West Lyn rivers and, consequently, many tons of water, soil, boulders and vegetation descended through the narrow valleys (or coombes) of Exmoor from 500 metres up on the moor to meet at sea level in Lynmouth itself. On its way, various bridges blocked the flow until they collapsed and subsequently a wall of water and rubble hit Lynmouth in the late evening.

Effectively, Lynmouth was destroyed during that night.

The statistics make incredible reading. The West Lyn river rose 60 feet (18.25 meters) above the normal level at its highest point; 34 people in the wider area lost their lives – 28 in the Lynmouth/Barbrook area alone.

In 1953, the “58th report of Scientific Memoranda of the Devonshire Association“, prepared by specialist Mr C H Dobbie, concluded amongst other points that “the flow (of water) in the tributaries and branches exceeded the ‘acute catastrophic flood’ definition for England. As assessed by a preliminary investigation, the flow could be included in the list of extreme flood discharges of the world. The tiny catchment area of 39 square miles yielded a flow that has only been exceeded twice by the River Thames with all its 3812 square miles since measurements started in 1883.“

Further, Mr Dobbie calculated that the water that fell in that one day would supply the water needs of Lynmouth’s total population for 108 years.

Following the devastation, 114,000 tons of rubble was cleared from the village, some of it being used to extend the Esplanade Car Park, but most of it being dumped into the channel and dispersed by tidal motion.

It took nearly six years to rebuild and remodel Lynmouth, and the design of the flood overflow area above the Maybridge is calculated to take one and a half times the amount of water that flowed through the village on the day, so it is hoped that such a disaster could never happen again.

If you visit Lynmouth in the future, be sure to look at the Flood Memorial Hall near the harbour. Alternatively, visit the Exmoor National Park Centre at the Lynmouth Pavilion on the seafront where gentle guided walks, with photographs and accounts of what happened on that fateful night, are regularly run.