You are here:
ItinerariesHilary Bradt Guides 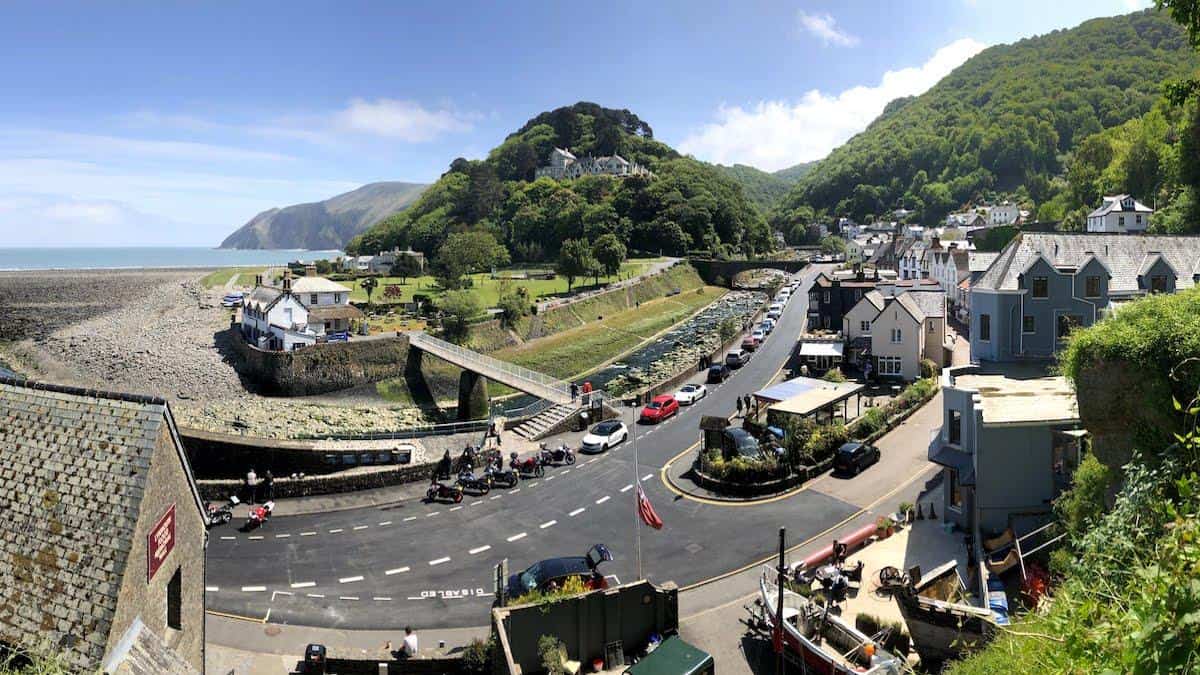 LYNMOUTH IS PROBABLY THE MOST POPULAR PART OF EXMOOR – AND DESERVEDLY SO.

It really does have everything, and all within walking distance: a pretty seaside village, a cliff railway, a tumbling river cutting through forested slopes, the heather-clad moor, and a dollop of recent history.

Painters and poets have rhapsodised about its beauty: Gainsborough thought it the perfect place to paint, and Shelley lived in Lynmouth for nine weeks with his first wife. Writing in 1928, S P B Mais felt that: ‘Ordinary standards simply won’t do to describe this corner of Devon. One realises dimly and dumbly that no other combe of one’s acquaintance comes quite so obligingly near to the hotel door to show its beauty of wood or majesty of cliff.’

Lynmouth was ‘discovered’ in the early part of the 19th century when the Napoleonic Wars had closed the continent to English visitors, and the English gentry had to be satisfied with holidaying nearer to home. The Rising Sun Inn was already there to cope with this influx and other inns were hastily built, but it seems that once the war was over, there was fierce competition between the three lodging houses for potential customers. Murray’s travel guide of 1856 warns that: ‘telescopes are employed at the rival houses for the prompt discovery of the approaching traveller. He had better determine beforehand on his inn, or he may become a bone of contention to a triad of postboys, who wait with additional horses at the bottom of the hill to drag the carriage to its destination.’ When you look at the hills they had to climb you can see why additional horses were required. Stagecoaches continued to be used here well into the 1900s; the hills were too steep and too rough for the new-fangled charabancs.

The popularity of the village was noted, somewhat sourly, by J L W Page in 1895. ‘Lynmouth consists of a single street facing the river. Every other house is a hotel or a lodging house [not much change there, then], but the general appearance of the place is not unpicturesque, and some regard has evidently been had for the romantic surroundings.’ He points out that Lynmouth was once the centre of herring fishing until, in 1797, ‘they suddenly departed. So Lynmouth had to fish for other fry and does it pretty successfully.’

‘Every year does the shoal of visitors increase, and probably they pay better than herrings.’

The publisher Sir George Newnes lived in Lynton, at Hollerday House, and gave the town its cliff railway in 1890, as well as its town hall. Newnes founded the racy magazine Tit-Bits and followed it up with the altogether more serious Strand Magazine which was the first to publish Sherlock Holmes stories.

In addition to its other attractions, this area is superb for walking, comprising not only cliffs and moorland but a selection of walks, both circular and linear, along the beautiful East Lyn River and its accompanying woodland. Indeed, Croydecycle’s Mike Harrison believes ‘There’s no better place to walk in Britain than this area.’ Just two sample walks are described here; buy Mike’s Lynton, Lynmouth & Doone Valley map and devise your own.

This is an extract from Slow Travel: Exmoor National Park by Hilary Bradt, published by Bradt Guides. Text © Hilary Bradt. All rights reserved.

5 Beautiful Things to Do in Exmoor
7 February 2020